Getting Back By Giving Back

Posted on April 18, 2013 by Tatiana in Balancing It All, Uncategorized | Leave a comment

I have been asked to speak to various groups over the past few years.  These groups range from high school students, to business/entrepreneurial groups, to social groups to collegiate classes and clubs.  I spoke to a group of what I thought was going to be teenager who are entrepreneurial-minded, but there ended up being many adults and senior citizens.  When I finished speaking, I had quite a few students and seniors speak about how inspired they were.  Two older ladies stated that they wish they were younger because they were inspired to take a leap of faith to start a business.

The feedback I received was overwhelming.  I don’t think that the groups knows, I got probably as much as they got out of the talk from their responses.  There is really something to be said about the rewards of giving back.

“From what we get, we can make a living; what we give, however, makes a life.”

Glass Empty or Half Full? Just a matter of how you look at things!

Posted on April 12, 2013 by Tatiana in Uncategorized, You Go Girl...Let Me Hear Your Story | Leave a comment 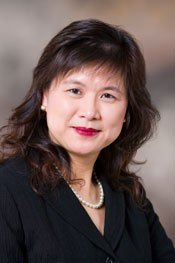 Elinor Ho, Principal Advisor at Secure Planning Strategies, attended college in Hong Kong and did not move to the United States until 1994 where she continued her education taking financial planning classes at Pennsylvania State.  She didn’t realize it at the time, but her position as hotel manager in Hong Kong greatly prepared her for her career path in financial planning.

“The communication and hospitality side of hotel management really gave me the patience to care for my clients in financial planning,” said Ho. She began as a minority in her industry, who knew very little English and had to start from scratch. Coming from another country and competing against others in her field proved that Ho could do the hard work, and had determination and dedication to be successful.

“I would get all the client’s that nobody wanted,” she laughed. Ho was able to explain financial planning in layman’s terms which led to her Chrysler account, marking the beginning of her journey. Her communication skills were superb and explaining concepts to clients was so great, that she was offered a job to teach classes at Chrysler for the employees. This was how she grew her practice in Secured Planning Strategies.

Ho is someone to be admired. She not only has a successful business but she is also a mother of two sons and a wife. So how does she balance it all?

“It’s not easy but I plan three or four days a week to cover all my work so that I can be home the other days and when my kids are sleeping is when I get my work done. You just have to say, “This is what I want- focus and go for it!”

Ho offered some great advice for young females so that they keep their finances in order:

Ho also offers a monthly educational workshop for free that teaches you how to live longer and manage your finances on your own. To learn more about Ho and Secured Planning Strategies click the link below:

She is the perfect example of success in both her professional and personal life. She shows young females that starting at the bottom can have its advantages depending on how you want to look at the situation.

Admiration in A Relationship

Posted on April 4, 2013 by Tatiana in Uncategorized | Leave a comment

I feel like the questions of the year (so far) are:

Business is great.  Yes I am happy.  What am I looking for?  Good question.  My list has definitely evolved from my early 20s when it was literally 2 pages.  It know consists of character and personality items, rather than physical and social items.  They have a lot to do with…what makes me tick, what genuinely makes me happy, and what makes me look at things from a different perspective (we vs. me).  I was talking to the gentleman that I’m dating a few weeks ago and he told me that he was thinking about me one day, and went on to explain how much he admires me.  That conversation has stuck with me.

I looked up “admire” in the dictionary and the following definition came up:

1: to regard with admiration

I have realized that admiration is a key component to any relationship that I will be in.  I have stated that to friends in the past (when talking about why certain relationships didn’t work out) how important it is for me to have mutual respect, admiration and appreciation in a relationship.  I must say that it feels good to be in a place where I have that.

“To love is to admire with the heart…To admire is to love with the mind.”

$$ How Not Knowing the Scene Turned into Green! $$

Kerry Doman, Founder and CEO of After5 Detroit, came back to town and needed friends. After going away to school in Ohio and then moving to Chicago for a year, she didn’t know anyone when she returned home to her Detroit roots. Starting with her own personal need, little did she know that it would turn into the successful business it is today.

Five years ago, Doman got the idea to create a website for young adults to explore the area. It would highlight special events, destinations and other fun things in the area. Since she didn’t know anyone or the scene of Royal Oak and Birmingham, she assumed she wasn’t the only one that needed help mingling out in the town.  She decided that the idea was a business (never a hobby) and she dedicated her savings to make it grow.

“I had established a good chunk of money and I was left with the thought: Should I buy a house or start a business?” said Doman.

She had no idea where it would go but she made the risk, which turned out to be a good one! She started surrounding herself with knowledgeable and truthful people who offered their support to establish what we now know as After5 Detroit.

“Much of starting your own business after you have taken care of the legal stuff is feeling around in the dark,” explains Doman who has experienced obstacles along her journey. “Never be afraid to prepare for the worst.  The amount of effort and money a business takes should be multiplied by ten because there will always be unforeseen circumstances so that it never hurts to save and plan properly.”

Since the start of After5, it has since expanded to include Connect After 5 and After 5 Intern Program which are both targeted to attract and obtain young professionals in the Detroit area to showcase our city and talent. It has become part of the change in Detroit for revitalization so that we are becoming a community where we work, live and play.

Doman is a true example of a successful female entrepreneur who took an idea and showed risk which produced wonderful and growing results. She offered a couple of tips for future entrepreneurs:

Posted on March 12, 2013 by Tatiana in Uncategorized | Leave a comment

I was supposed to have written this initial post back in January (it’s now March 11).  The past few weeks have been filled with meetings, proposals, strategic planning, determining budgets, working out with a personal trainer, travel, and working on start-ups (while also giving up alcohol for Lent).  I have been “focused” to say the least.  I have been thinking of various blog posts but just haven’t sat myself down long enough to write.  So, as I sit here, I have to reflect on my past day.

I am from and reside in Detroit (metro-Detroit).  If you’re from the area, your day’s plans were interrupted by the verdict of the Kwame Kilpatrick trial.   I have super mixed feelings on the whole thing…while I think that justice has been served for the ruthlessness of his actions (and Bobby Ferguson), I also think about the realities of politics.  I’m sure that many of things that went on while he was in office have gone on before him, are going on today, and will continue after his demise.  Regardless, his will be serving his time.

I then thought back to the start of my career.  One of my earliest positions was working for the Detroit Super Bowl XL Host Committee.  I worked in the Governmental & External Affairs Department.  Many of my projects involved the Emerging Business program (the NFL procurement process), community relations, the general public and working with City Council and Mayor’s Office (among others).  I witnessed first hand the arrogance and “entitlement mentality” that some of these elected officials had (I must say none of these individuals were from Kwame Kilpatrick’s office).  I also witnessed (and truly admire) others who held way more wealth and power not show an once of arrogance (Roger Penske).  I learned A LOT while in that position, to say the least.

Over the past few years, I have seen some of these elected officials and their staffers (who were outright rude to me), go through the judicial system, serve their time, and come out.  I have also seen the evolution of other young professionals, such as myself, who worked in the same environments as me at the time, grow and be great at what they do.  I spoke to my Mom about Kwame Kilpatrick today and she talked about how much of a great man he is/was; from intelligence, power, charisma and other qualities, but that his ego got him into this position.

As an entrepreneur, who is experiencing success, I must say that today was a reality check.  I am always looking at myself, determining ways of being better and making sure I stay truly humble.  However, the events of today are a further representation of the importance of as my Grandmother would say “don’t get too big for your britches”.  I will also look at myself, and ask others to do the same, to ensure that I remain focused, honest, “hungry”, faithful and humble.  I hope those reading this do the same.

“Talent is God given. Be humble. Fame is man-given. Be grateful. Conceit is self-given. Be careful.” –John Wooden